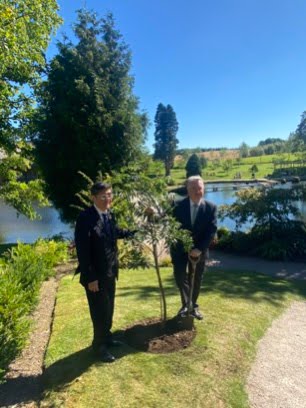 Member of Parliament for Ochil and South Perthshire, John Nicolson, welcomed diplomats from the Consulate of Japan in Scotland to Ochil and South Perthshire on Thursday. Consul General Tadashi Fujiwara and Deputy Head of Mission Minori Ishii were given a tour of the Japanese Garden at Cowden by Mr Nicolson and Chair of the Japanese Garden at Cowden, Sara Stewart.

At the turn of the 20th Century, the Scottish adventurer Ella Christie returned home from a trip to Japan inspired to build her own Japanese Garden. The Japanese Garden at Cowden became the first and only garden of its size and scale to be designed by a woman. It remains a unique and utterly authentic bridge between Scottish and Japanese culture.

Sadly vandalised in the 1960s, the garden was restored by a team of experts and was inherited by Sir Robert Stewart, former director of the Clackmannanshire Heritage Trust who also restored the Alloa Tower. Today, the garden is managed by a charitable trust under the chairmanship of his daughter, Sara Stewart.

During their visit, which coincided with Mountain Day in Japan—a national holiday to provide “opportunities to get familiar with mountains and appreciate blessings from mountains.”—Japan’s chief diplomat in Scotland planted a Mountain Ash sapling with Mr Nicolson and gardeners Connor Robertson (from Alloa), Thomas Oneill (from Raploch) and Frazer Leighton (from Dollar).

Speaking to the Alloa Advertiser on Friday, John Nicolson said, ‘The governments of Scotland and Japan enjoy warm relations and the two countries have a long shared history. So it was an honour to show the two most senior diplomats of Japan in Scotland one corner of my beautiful constituency. The Japanese Garden at Cowden sits at the foot of the magnificent Ochil Hills and what better way to spend Mountain Day than to plant a Mountain Ash sapling with the Japanese Consul General on such a glorious day.’