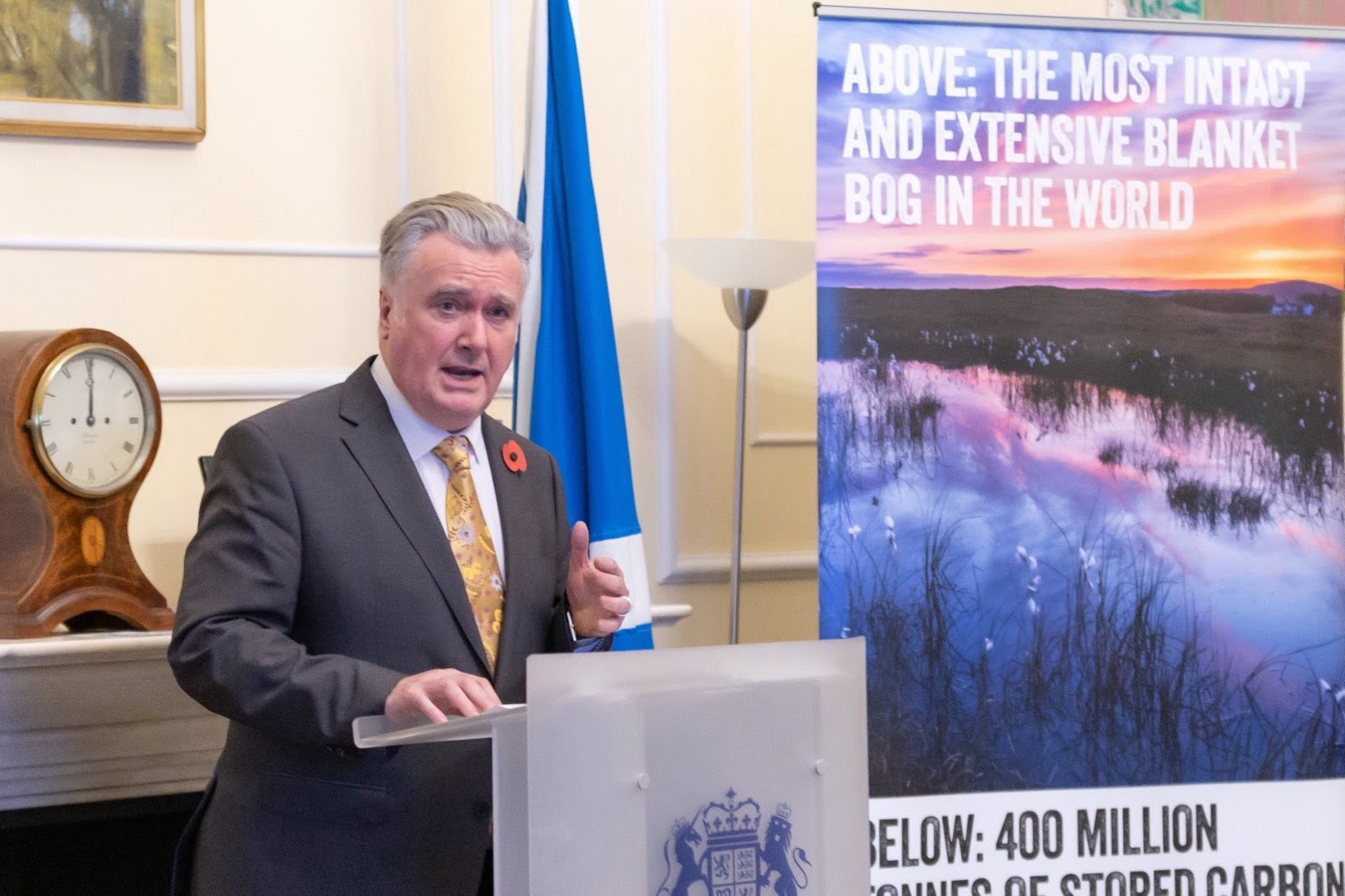 On Tuesday 1st November 2022, John Nicolson MP joined cross-party colleagues at Dover House to give a speech in support of The Flow Country’s bid for inscription on the UNESCO World Heritage List.

Westminster may be in a fever pitch of chaos and indecision. But it’s good to be here in an oasis of calm cross-party agreement.

I am delighted that we come together this evening, across the political divide, in support of something we must all cherish and protect: our world heritage.

UNESCO was founded in the aftermath of World War II on the principle that ‘since wars begin in the minds of men, it is in the minds of men that the defences of peace must be established.’ Wise words by Scottish-American Archibald MacLeish, Librarian of Congress.

Our cultural heritage plays a vital role in bolstering peace since it is shared amongst nations. It does not belong solely to any one of us or to a group of us. We are custodians – sometimes inadequate ones – of a priceless heritage handed down through the generations. Our heritage teaches us where we come from. It gives us a sense of belonging and a common cause.

It is for this very reason that, right now in Europe, Russia is waging a war not only on the people of Ukraine, but on their cultural heritage. It was George Orwell who said: ‘“The most effective way to destroy a people is to deny and obliterate their understanding of their own history.” UNESCO reported in June that 152 cultural sites in Ukraine had been partially or totally destroyed since the beginning of the war. A terrible loss for Ukraine, her people and the wider world.

I am sure you will remember, as I do, the images of citizens of Odessa piling up sandbags around their statues and buildings to protect them from Russian shelling. At that moment of grave danger, the citizens of Odessa knew they were not just protecting brick and bronze. They were defending their own history and in our common European home.

This month marks the fiftieth anniversary of UNESCO’s Convention on World Heritage. The convention recognised that our cultural and natural heritage is increasingly under threat from destruction, not only from traditional causes of decay, but from changing social and economic conditions. The convention codified our need and obligation to preserve heritage for future generations.

War, of course, is not the only threat to our cultural and natural sites. From Sunday, COP27 will take place and leaders from around the world—including Scotland’s First Minister—will head to Egypt as part of a two-week summit to discuss the climate crisis on a global level. Climate change poses a grave threat to the cultural and natural wonders we have inherited.

Stretching across Caithness and Sutherland, The Flow Country is widely considered to be the most intact and extensive blanket bog system in the world. Ecosystems like peatlands are capable of absorbing and storing great amounts of carbon dioxide and these ‘carbon sinks’ play an essential role in fighting the climate crisis. Following Lula’s victory in Brazil on Sunday, I think it’s safe to say billions of us around the world sighed in relief. But we cannot be complacent and the inscription of The Flow Country on the World Heritage List would send a strong signal from Scotland to the world about our passionate commitment to tackling climate change and preserving biodiversity.

And what an example of biodiversity The Flow Country is! This globally rare habitat includes a wide range of peatland vegetation, bog pools and a selection of rare and endangered bird and insect species. It’s stunningly beautiful.

I have a particular interest in the site. My family stretch back centuries in Sutherland. And I recently came across the handwritten will of my four-times-great-grandfather leaving the house at Langwell built “by his own hands’ as he put it, in the late 18th century, to his three bonnie daughters. It’s now lovingly cared for by its current owner Paul Dacre of ‘Daily Mail’ fame. I hasten to add not a relative.

So it’s been my pleasure these past months to learn more about this extraordinary patch of our beautiful country and to lend my voice to the chorus of environmental and cultural actors in Scotland who are working hard to earn us another UNESCO World Heritage Site.

Obtaining UNESCO World Heritage status brings international recognition, acclaim and more often than not visitors. Sutherland, the Gaidhealtachd and Scotland welcome guests. It’s no coincidence that our unofficial national motto is Ceud Mìle Fàilte – a hundred thousand welcomes. Scotland loves visitors and visitors love Scotland. And the inscription of The Flow Country on the World Heritage List would be one more reason for visitors to come.